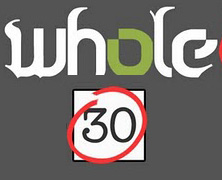 Day 27 and I’m up early after an easy, restful, pleasant night’s sleep.  As I type this up I’m sipping on some coffee (black no sugar, of course), baking some high quality cruelty-free bacon and in about half an hour I’ll fry up some locally raised, naturally produced eggs from the farmer’s market and sweet potato hash.  I do it without thinking now, it’s completely my habit.  My my how far we’ve come.

Last night Nikki from Kettlebells & Kale was over for dinner (beef stew slow cooked in the crock pot for 10 hours), nerdy games (Munchkin & Flux), and some one on one goals coaching (drawn from work she did in January’s goal setting exercises).  While going over her goals I noticed her struggling to imagine her own long term potential.  It’s like she can’t imagine who she might want to be way down the road, completely unaware of what I know she’s capable of; and it’s caused me to reflect a bit on my own journey.

Growing up I watched the women I looked up to cycle through every fad diet on the planet.  Three of them have lifetime memberships to Weight Watchers, yet they try Medifast, South Beach, Atkins, and any host of 90’s diet bs.  They all seemed so unhappy with their bodies, and I couldn’t imagine why because I thought they were beautiful!  Everyone told me I looked like them (because I do), and eventually I hit my own adolescence and believed I was also fat and unattractive because I’m such a “big girl”.

None of this helped my relationship with my self esteem or food.  In high school I would eat 4 or 5 helpings of the school lunch, taking donations from my friends unfinished portions.  The lack of portion control was written off as being highly active and athletic; but really I had no idea how much I should be eating.

Even after I was injured playing rugby in college I kept eating that way, packed on 40lbs when I was already a bit bigger than I should have been, and struggled to take it off.  That’s all another story.

Fast-forward to a year ago.  I had just become a personal trainer, I was stress eating regularly to survive the very emotionally taxing “ramping” process at my upscale gym, and trying not to pack on too many pounds.  I spent all day coaching others on how to be well while abusing myself with food.  Pizza was rationalized as a necessity, though I got the nicest pizza I could find on whole wheat crust with tons of veggies.  By March I was flipping from one “healthy” fad diet to the next.  Eliminations. Smoothies. Juices.  Acai bowls. Peanut butter. Protein powder. Lara Bars. 4 Hour Body.  All of them touted by the health & wellness industry as “healthy”, and all of them processed shit.

By the end of the summer my stress was lower but my control was down.  I’d cut out the obvious things like crazy amounts of alcohol & any processed wheat products; but I still felt like crap all the time.  Cue finding It Starts With Food and my first Whole30.

Whole30 has not only given me the structure to understand what I should be eating & when, but the science to understand why.  When I toe off the reservation I can feel the difference in everything from my sleep to my mood and joint health.  That level of understanding has been essential with compliance; which is the #1 factor is changing your life.  You can have the best plan in the world, but it wont matter if you don’t do it.

The second time around has only solidified how important what you put in your mouth is to how your body functions & the way I want to eat for long term wellness.

The UA tribe of January Whole30 seems to have settled into a relative peace this week.  Nikki from K&K and I are both ready for a little break but then we’re thinking of doing another month together after a weekend of the foods we miss.

The Mother Ship (yes, my mom) & “The Real Deal” (another friend/client) have had a rough month.  Upset stomaches and a history of GI problems haven’t resolved as quickly as they’d both hoped.  However, this week they’ve both felt progress.  They both think they’ll need an extra couple of weeks to feel the full affects of a healed “leaky gut”.  I agree.

Me personally?  One of the big reasons I wanted another W30 was my damned shoulder.  You may recall after W30 #1 my shoulder still hurt, though everything else felt pretty good.  It’s possible I have some tendinitis (probably tendinosis due to the amount of time I’ve had it) in addition to a few funkily spasming muscles (a technical term, I assure you).  This January I’ve been working with an amazingly talented massage therapist in addition to the change in diet.  I’m happy to say I was pain free for 5 whole days this week!  We’re hoping I can make it the full week this time around.  Fingers crossed.

If it is tendinitis it needs 6 weeks free of inflammation to heal.  Meaning I’ll also need some extra time.  So I guess Nikki has to wait until mid February for the weekend off.  She’s a patient gal, she’ll be okay.

Friday afternoon Nikki and I were in our gym foam rolling before a session (I train her) and a woman comes over to say ‘hi’.  Last Friday her trainer had mentioned Whole30 to her in a session and called over to us.

“It will change your life in a way you never thought food could.” I told her, “Go get the book.” (Nikki seconded this sentiment.)

This week she told us that she had just bought it.  She hadn’t cracked the cover yet and I told her not to wait.  “It seems really hard though” she bemused.  “It is hard.” I said, “It’s really hard at first.  But you have to ask yourself what you’re willing to give up to get what you want.”