As a kid the Adirondacks meant trips to Great Escape and a few hours stuck in the back seat with two older brothers (and once a carsick evacuation in my mom’s purse.  Yes, I really did.)  Returning as an adult I was hoping for something a bit more ‘ka-pow’, but not necessarily the alcohol-infused idiot fests that I’d been hearing my friends and siblings brag about the last few years.  No, no… we were gearing up for an Adirondack Adventure Extravaganza Weekend; and we were not disappointed.

There’s plenty to do in the largest state park in the union: hiking, boating or jet skiing on Lake George, outlet malls, mini golf, para-sailing.  You can get your weekend jones of either adrenaline or chilling; we were hoping for the former.  While researching rope-assisted tree climbing on the east coast I came Adirondack Extreme, an “adventure ropes course” full of zip lines and physical challenges that immediately jumped to the top of ye ole short list.  Add a strong love of horses and the bonus of my brother being a ‘bull fighter’ at the local rodeo (more on that later) and we had a weekend plan!

Unfortunately, the New York exodus traffic disagreed with our arrival time; but setting up tent in the dark is it’s own little adventure!

The name “Adirondack Extreme” immediately struck me as too much and less than creative; but I was quickly told by the Adventure Gods to put a freakin’ sock in it!  If you’re looking for something to challenge you, regardless of your fitness level, and you really want to be sore on Monday (so you can constantly be reminded that you did something that weekend) then this is a solid choice.

It’s a good destination if you have a mixed-bag group of people who generally like to try something different, but aren’t all in the best of shape.  Their are 5 courses that grade up in level of both physical and mental challenge.  Early on we were all laughing and joking (the largest challenge in the first 3 courses was to my claustrophobia when I had to crawl through a barrel-like tube suspended by a cable… odd when you’re in a giant forest), but by that 4th course you start wondering when you’re going to smack up against your own limit.

Almost all of us made it through the full course (with the exception of our group who is afraid of heights and gladly took pictures from the safety of the ground).  By far the most intense and rewarding was the Leap of Faith ~ after nearly an hour of tree-jumbling your arms are exhausted, your shoulders on fire, so hey: why not take a quick swing and drop of a platform where your intentionally asked to hold the rope slack so you drop off and catch yourself!  I screamed like a girl; being that I am a girl I’m okay with this.

After a morning of monkeying around and a click brunch at a local diner a pleasant afternoon with a beautiful, calm, powerful creature seemed the perfect choice.  While our trip wasn’t actively unpleasant it didn’t exactly live up to expectation either so I’ll spare you the boring details and say this: do your homework as well as you can and, in the event that they aren’t what you’d hoped they would be, do your best to enjoy it for what it is.

There are dozens of ranches and stables that give horseback riding tours and lessons in the Adirondacks.  Most are family owned and have been for generations and they will certainly appreciate your patronage and your hard earned tourist dollars. 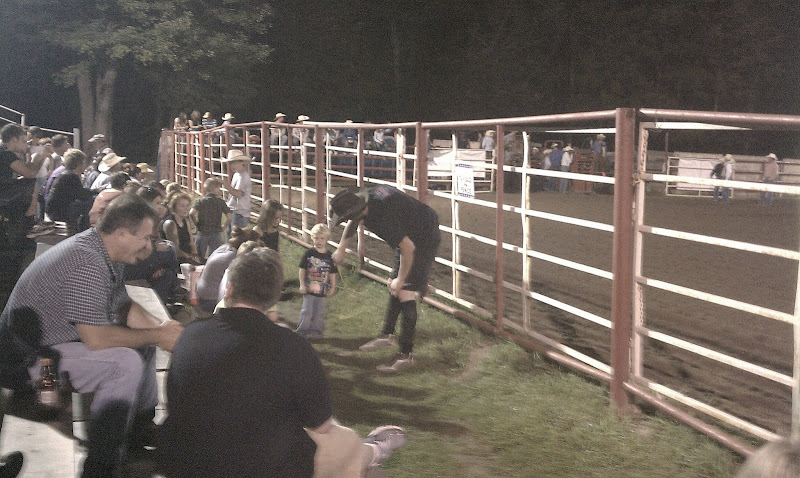 I know what you’re thinking… rodeo in upstate New York!?  YES!  Of Course!  There are at least 3 rodeo circuits upstate that I know of and I’m proud to say my older brother used to ride them.  Then he had a gnarly accident… now?  He’s a ‘Bull Fighter’ at the Double M Rodeo in Balston Spa, NY.  That’s a rodeo clown without the makeup (Fun Fact: rodeo bull fighters call those other guys Spaniards).  His job is to keep the cowboy who just got tossed from being trampled on like a cigarette butt.  He’s good at it too!  The night we were there he saved a fella who was being pushed into/pinned under a fence by getting in between the cowboy and the 1 ton raging animal.

Be sure to stop by the rodeo if you’re up there; it’s a great time, kids love it, and there’s a BBQ before that feeds 4 people for what a single entree in New York costs.

There are as many options for where to park your head as there are things to do in the Adirondacks.  I suggest Sacandaga River Campgrounds.  They’re state run, clean, have wi-fi and bathrooms with plumbing, and showers.  Even better: if you get a site in the back you can be right on the river and go swimming without anyone bothering you (watch out, the current is a little swift).  We were there in late August and half the sites were empty, so it’ll be quiet and you can keep to yourself.

Mermaid or Whale Tale? »
« Yoga’s Not a Race